We can thank Germany for the bunny
The idea of the Easter bunny giving candies and eggs is said to have originated in Germany during the Middle Ages, with the first written mention of this tradition dating back to the 16th century. Dutch settlers in Pennsylvania brought the bunny to the United States in the 1700s. 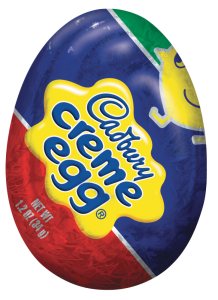 More than 1.5 million Cadbury Creme Eggs are produced every day
Birmingham is home to the the most popular egg-shaped chocolate in the world, where 500 million creme eggs are produced each year.

The world’s most expensive chocolate Easter bunny is worth $49,000
Made of cocoa from Tanzania, the bunny measures 38cm tall and weighs in at 11lbs. It includes a pair of 1.07-carat solitaire diamonds valued at more than $37,320.

Pretzels used to be associated with Easter
From the 1950’s, it was tradition for Germans to eat a pretzel and a hard-boiled egg for dinner on Good Friday. The twists of a pretzel resemble arms crossing in prayer.

The largest Easter egg hunt ever consisted of 501,000 eggs
On April 1, 2007, 9,753 children and their parents searched for over half a million Easter eggs at the Cypress Gardens Adventure Park in Winter Haven, Florida.

The largest chocolate Easter egg weighed 15,873 lbs
It was measured at Le Acciaierie Shopping Centre, in Cortenuova, Italy, in April 2011. 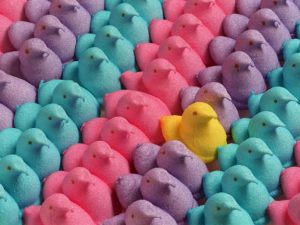 27 hours to make one PEEP?
• In 1953 it took 27 hours to make one PEEP because it was handmade with a pastry tube. Thanks to advances in technology, today it takes just six minutes.
• The Bethlehem, PA factory makes an impressive 5.5 million PEEPS a day.
• In the late 1950s PEEPS® wings were “clipped” to give them a sleek, modern look.
• There are 23 flavors of PEEPS this year.