Summit County is home to anywhere between 200-500 Moose and that number continues to grow. Read on to find out answers to the most frequently asked questions about moose.

What is a male moose called?
The male moose is referred to as a bull. Bulls are larger and darker in color than females. They also have an enormous set of antlers on their heads. 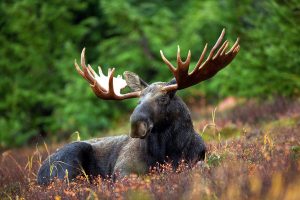 What is a female moose called?
A female moose is typically known as a cow. They are usually smaller than males, don’t have antlers and have a smaller bell.

What is that long, dangly thing hanging down from their neck?
The dewlap, also known as a “bell,” is the flap of skin that hangs under a moose’s chin. Scientists are still unsure of its purpose.

What do they eat?
Primarily bark, leaves, twigs, berries and aquatic plants, with a strong preference for willows and aspens. 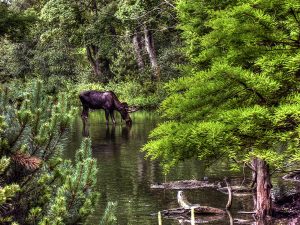 How much do they eat?
Moose need to consume 9770 calories per day to maintain their weight. They will eat up to 70lbs of food per day.

How much do their antlers weigh?
A full grown moose’s antlers can weigh about 40 lbs.

When are they most often seen?
They are most active at dawn and dusk.

How far do they roam?
Moose are solitary animals and live in a small area, around 5 square miles. 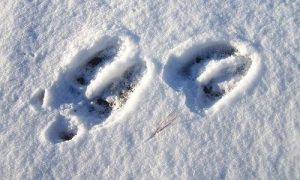 Where do they sleep?
Moose sleep on the ground leaving beds of flattened vegetation or depressions in the snow.

How long do they live?
The average lifespan is 8-12 years.