Moose are majestic animals. Appreciate and enjoy their presence – just make sure every encounter is a safe one.

When are moose more likely to be aggressive?
• In late spring/early summer when a cow (mother) feels her young calf is in danger
• In the fall when a breeding bull (male) is competitive and agitated
• In the winter when they are hungry and tired from walking in deep snow 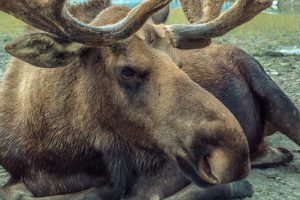 What provokes a moose?
• # 1 – Dogs. Moose really, really dislike dogs. Wolves are a moose’s primary predator. Unfortunately moose cannot differentiate between your dog and wild carnivorous wolf.
• When people repeatedly approach them or chase them away
• Traffic
• Getting too close to a calf
• Getting too close, period. Don’t yell, throw things or offer food.

According to Lyle Sidener, area wildlife manager for Colorado Parks and Wildlife in Hot Sulphur Springs, “almost all incidents with aggressive moose involve dogs getting too close to the animal. In most cases, a threatened moose will naturally react and try to stomp on the dog. The frightened dog will typically run back to its owner bringing an angry, thousand-pound moose with it.” The sight and scent of your dog can easily provoke moose. Therefore, if you encounter a moose while with your dog, immediately leash your dog and keep them back.

What are some warning signs that the moose will become aggressive?
• Laid back ears
• Raised hair on it’s back, neck or hips
• Smacks or licks its lips and clicks its teeth
• Stops eating and stares at you
• Lowers its head and walks toward you
• Urinates
• Shows the whites of its eyes
*Disclaimer: a moose may not show any signs and charge without warning. Always be on guard and keep your distance. 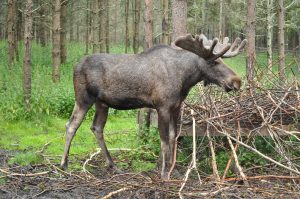 If a moose approaches you…
Back away

If a moose charges you…
An aggressive, confrontational moose is trying to do one thing: drive you off. Run. Do not stand your ground. If possible, place a tree or other nearby object between you and the moose as you retreat.

If a moose attacks you…
• Back off and run. Get behind the nearest tree, fence or building that can act as a strong barrier between you and the moose.
• Curl up in a ball if a moose knocks you to the ground.
• Don’t get up until the moose moves a good distance away